Today is week 3, day 3 of this admission and this time I haven’t stepped foot out of the hospital doors. It’s even looking like it may be a little while more before that happens. I’m not “medically stable” enough, the treatment team are saying, even if I was mentally okay (which if I’m honest with myself, I’m not.) Because, if you can believe it, they are talking chronic starvation.All I can think is:

Yes, it’s true. All these years of abusing my body (though sometimes subtle, sometimes not so subtle) and trouble with my intake, which I solidly believed was never enough to qualify for the help I’ve received over the years:

and I thought it was normal to be able to go for quite a while with no intake at all without upsetting my bloods or my obs or my BGL (okay, I sort of think of it a little like a superpower sometimes.)

But this admission, well, it has been a rollercoaster that never seems to stop. My heart has been having trouble. My obs were getting bad. My bloods finally ended up a little awry. And I’ve been feeling so sick I sort of dread having a shower sometimes because I am afraid of passing out and having the nurses find me naked (just the thought, ugh!) Alas, since they’ve started force feeding me I have to admit to have been slowly feeling better physically, even if mentally I’m still struggling. I’ve also been getting to know the security staff- not fun but I understand they are just doing their job, and I honestly think some of them understand my thought processes at the moment more than some of the nurses.

My inpatient dietitian has been very good to me in that she understands my distress with her and the treatment team working with EDOS and slowly bumping my feeds up to SO MUCH MORE (like 4 times what I was having at home when I wasn’t struggling and had a good day!) than I have been use to. For the record I’ve just been changed from overnight feeds to bolus feeds, from Nutrison MF 1.0 to Fortisip MF 1.5 to (making my tummy more comfortable with less fluid) Nutrison Concentrated 2.0. Any amount of feed at the moment makes me feel nauseous, bloated and uncomfortable and sends my thoughts and urges and the voice into overdrive and if I was having to go through this at home, I know I wouldn’t be able to cope. I can barely cope here. But what choice do I have in the matter? None.

Of course, with this going on, everyone is being very careful when it comes to refeeding syndrome, which is pretty horrific and a real possibility we have to entertain, as my bloods have already shown the first symptom associated with it. I don’t know how long getting ahead of this chronic starvation will take. It’s been suggested a few weeks at least.

All of this, as has been repeated to me many times, is starving my brain and affecting my thought processes, and maybe even contributing to my other mental illnesses- making thinking straight really difficult, not helping with dissociative episodes and, just generally, making the voice harder to ignore and bad thoughts and urges stronger. Everyone around me is hoping that after a little while of adequate nutrition, it will bring these things more under my control.

My Dad, going through all this with the family and seeing me feeling so completely helpless and hopeless and out of control, took it upon himself to buy me a special something. I mention it especially because it’s from one of my favourite foundations- The Joyful Heart Foundation– and I have wanted this item for years. He gave it to me yesterday and I could not have been more surprised and ecstatic to put it on. It’s the FEARLESSNESS pendant. It means so much to me after having gone through what I have. To me it represents conquering adversity and coming through hard times a stronger person. I am so in awe of the work Mariska and The JHF have done and now we’ve contributed too! Thank you Mariska Hargitay, The JHF, Me&Ro and, of course, Dad. 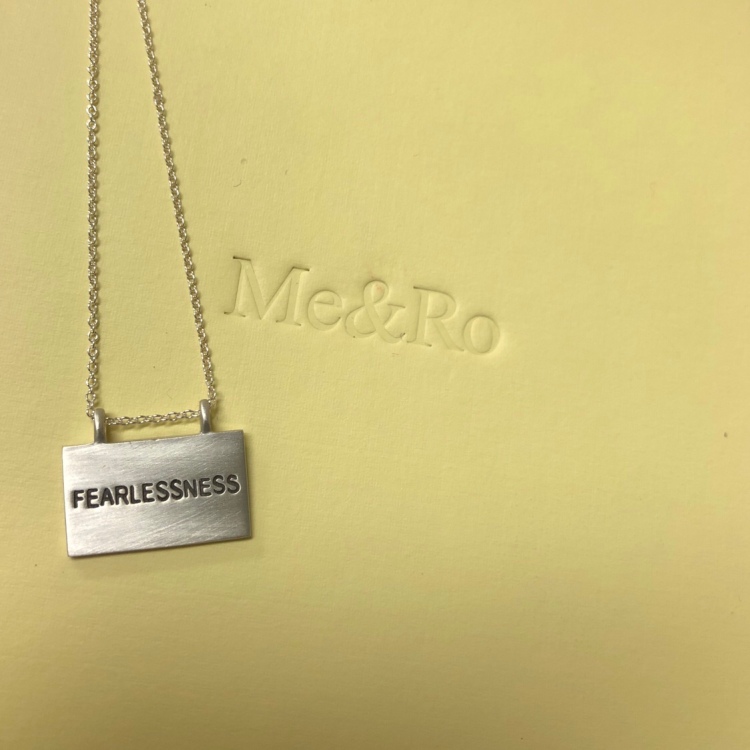 My parents are absolutely amazing, with what they’re going through at the moment of course- Mums pain is worse and she’s struggling every day but she still absolutely amazes me with her braveness and positive outlook despite it all, I don’t know how she does it. Despite everything they have been in to see me every day, no matter what else they have going on. I’m SO appreciative. And Brad and Amy came last week which was lovely (the week before that the family sent the most beautiful lilies and balloon, but apparently that was our dog Calvin’s idea!) And I’ve had several visits from our friends Deb and Amy and little Theo which always brightens my day, as do the messages I get from friends.

I also got an invite to the hottest wedding of the year! Phew. I was a bit worried for a little while! Planning is going well I think. It is going to be such a special time.

Back to the subject at hand- in conclusion, I really just want to say that eating disorders do not discriminate when choosing who they (with their inevitable complications) decide to inflict themselves upon. Weight isn’t always 100% an issue, you don’t have to be constantly extremely underweight or overweight to be suffering. (I’ve even had one nurse, in a mental health ward, say to me after I said I didn’t want my feeds “well it’s not like you’re going to starve anyway”. Which, apart from triggering the hell out of me, proves there is so much to be learnt, even for ‘professionals’.) The next person you walk past in the street, no matter what they look like, how normal they seem, could be caught in the darkness that is having an eating disorder. You just never know.

Right, it’s time to settle and listen to the rain and try to forget where I am, and what I have ahead of me, and try, try, try to get some rest!